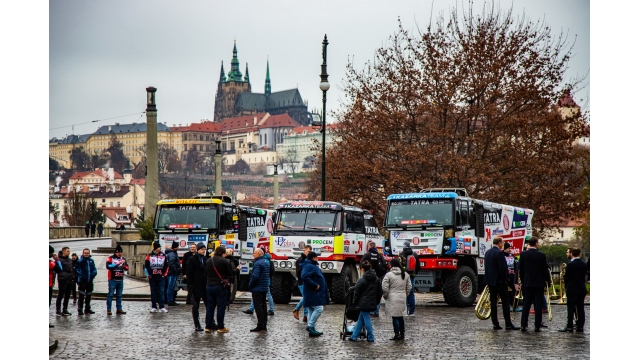 As location, they chose the in front of monumental Rudolfinum building, and silhouette of Prague Castle looked down on the Tatras from above. For luck, drivers and other team people heard fanfare played by brass section of the Czech Philharmonic.

For the very first time rally world has seen ??camouflage”, in which both Tatra Phoenix crews in truck category and a replica of the legendary Tatra Puma in Dakar Classic race will take part in famous competition. Alongside crew members of all three trucks in the very heart of Prague, there were also twins Aliyyah and Yasmeen Koloc. Both at the age of just 18 are waiting for their debut at Dakar Rally in Can-Am DV21 class T3 specials.

Neo-Renaissance building of Rudolfinum serves as the home hall for one of the world’s best orchestras, Czech Philharmonic. So, it is no surprise that several members of this ensemble also played for Buggyra. Fanfare was heard both on plaza in front of Rudolfinum, and also inside Dvo?ak’s Hall.

??It was the greatest experience of this day for me. I had never been to Rudolfinum and I was fascinated by its architecture. It’s a beautiful place. And the fact that the masters from the Czech Philharmonic played only for us, made my impression even stronger,” said Jaroslav Valtr.

Thus, experienced pilot could at least for a while banish his disappointment, that his son Michal will not start in Dakar Rallye for the family Valtr Racing team. “Unfortunately, we didn’t manage to find enough sponsors, so the project ended. But maybe in 2024 they will replace me behind wheel of Tatra truck in Buggyra colours. He is very fast,” dreamed Valtr senior.

Slovak pilot Radovan Kazarka, who is awaiting his first Dakar start in cooperation with Buggyra Racing, was also enthusiastic about the presentation. “I am very happy that we were also able to introduce ourselves in Prague. Thanks to Buggyra Racing for taking us under their wing. Looking at our Tatras and seeing Prague Castle behind them was an impressive sight,” said driver of Tatra Puma.

Buggyra will travel to France on Tuesday, where the organizers will take over racing cars and put them on a ferry bound for Saudi Arabia. Second group will join the team at the venue of the competition at beginning of December after rally in Dubai.